In a chilling new twist of events surrounding rapper Mac Miller's death, Cameron James Pettit, 28, was arrested Wednesday morning after a complaint was filed on Friday, charging Pettit specifically with one count of distribution of a controlled substance. The substance also happened to be laced.

The late rapper, who released his last album, Swimming, before he passed, was found dead in his home on Friday, September 7, 2018. The toxicology report concluded that Miller overdosed on a combination of ethanol, fentanyl, and cocaine. However, the recent complaint now suggests that a secret ingredient found in one of Miller's drugs -oxycodone- may have directly caused the early demise of the hip hop star. 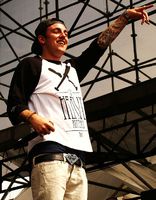 Miller performing at the NYC Governors Ball in 2011. Photo by commons.wikimedia.org

"Fentanyl disguised as a genuine pharmaceutical is a killer, which is being proven every day in America," United States Attorney Nick Hanna said in a press release on Wednesday. "Drugs laced with cheap and potent fentanyl are increasingly common, and we owe it to the victims and their families to aggressively target the drug dealers that cause these overdose deaths."

The affidavit, or statement supporting the complaint, was issued by Tommy S. Fung, a Special Agent with the United States Drug Enforcement Administration (DEA) who is also a member of the High-Intensity Drug Trafficking Area (HIDTA)  Fusion Task Force.

According to Fung, Miller was originally introduced to Pettit by Mia Pascal Johansson, a pimp and drug supplier, in early June of last year. Instagram photos of Johansson and Pettit suggest that the two were friends before coming in contact with Miller.

The rapper then continued to purchase illicit drugs from both Johansson and Pettit between June and September.

On the night of September 4th leading into September 5th, the 'Self Care' rapper contacted the duo for the last time. According to the affidavit, Miller messaged Pettit first on the night of the 4th between 11:07 pm and 11:58 pm, initially asking him for "addy" or Adderall. When Pettit told the rapper he did not have any, Miller asked if he could supply him with oxycodone instead, to which Pettit replied in the affirmative. At the end of their conversation, the affidavit concluded that Pettit agreed to supply Miller with 10 30 milligram oxycodone pills ("blues"), ten Xanax pills ("bars"), and cocaine ("ball") for the night.

The following is the text message exchange between Miller and Pettit as written in the affidavit. Note that Miller's real name is Malcolm James McCormick and is referenced by his last name.

However, about an hour after the exchange and failing to hear back from Pettit on the status of the drugs, the rap artist turned to Johansson instead.

After informing Johansson that Pettit was not responding, the former agreed to sell Miller substances, though in different amounts and with added drugs that Pettit was not originally going to supply. Johansson also offered to send her prostitute Karla "Carla" Amador, also known as Carolina Cortez, to deliver the drugs and to provide sexual services to the rapper.

Based on the affidavit, the text exchange concluded that Johannson was providing Miller with five oxycodone pills, ten Adderall pills, five hydrocodone pills (Norco), and two grams of cocaine.

Here are the text messages between Johannson and Miller during the early hours of September 5th.

Fifteen minutes later, Pettit finally replied to Miller stating that he "got sidetracked" and would be on his way to deliver the drugs he originally promised to sell, to which Miller replied "Fasho" or "for sure".

On the day of the rapper's death, police discovered the pills Miller purchased in his bathroom closet. After performing chemical analyses on the pills, it was determined that the following drugs were left:

-10 round orange pills imprinted with "U30" (genuine Adderall)

-14 round rectangular pills, some which were broken (genuine Xanax)

Johansson's aforementioned texts claimed that she would provide Miller with 10 Adderall, five oxycodone, five Xanax pills, and cocaine. Pettit's original messages stated that he was providing the rapper with 10 blue oxycodone pills, cocaine, and 10 Xanax pills.

Based on the number of pills that were left in Miller's bathroom, the rapper only consumed the cocaine, one Xanax pill, and six of the 10 counterfeit oxycodone pills provided by Pettit, whereas all five oxycodone pills that Johansson agreed to supply were still present along with the rest of the unused substances

The authorities also discovered a magazine with blue powder and multiple indents on the cover inside a safe in the rapper's bedroom, along with a rolled-up piece of paper and a gift card. This led Special Agent Fung to believe that Miller crushed and snorted the oxycodone containing fentanyl, ultimately killing him.

Pettit seemed to have foreshadowed his fate after news of Miller's death broke. In a series of cryptic messages, the 28-year-old confided in two friends that he was nervous and that he should "get off the grid." Pettit also mentioned that he would "most likely die in jail."

Since the Wednesday arrest, fans of the beloved rapper have expressed anger and disbelief over the unsettling news. Many even took to commenting angry messages on both Johansson's and Pettit's Instagram posts. One user commented on a photo of Johansson and her baby girl saying, "Hope they take your baby away so you don't feed it drugs or put it up for prostitution @miamouse8." Another commented on Johansson's apparent plastic surgery: "FILLERS WON'T DO WELL IN JAIL HUNNY!"

Comments on Pettit's social media page were not any more friendly, with one Instagram user commenting, "So you're the guy that killed Mac Miller."

Despite cries for Johansson to be put behind bars, she has not been charged.

As for Pettit, if he is convicted of the drug charges, he could face a maximum of 20 years in prison.