While they all have different styles of saving the world, all heroes have the same reasons for keeping their alter egos a secret: to protect the ones they love. Chadwick Boseman is no exception. 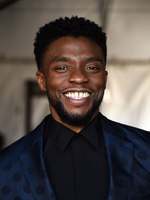 After the world got a glimpse of Boseman as the Black Panther in Marvel's 2016 blockbuster Captain America: Civil War, moviegoers everywhere flooded theaters to witness his close up in Marvel's Black Panther two years later.

While Boseman's character T'Challa was battling Michael B. Jordan's Killmonger for Wakanda's throne, the beloved actor was secretly fighting a four-year battle in real life.

On Friday, Boseman's family announced on Twitter that the Black Panther finally lost the fight against stage III colon cancer, which he was diagnosed with in 2016.

The news of Boseman's death sent shockwaves through the internet, with fans and celebrities alike expressing their grief over the loss of Wakanda's king.

This is a crushing blow.

Today all the black pantheres mourn the disappearance of their father 🕊 pic.twitter.com/ssHOwNBSfY

All For The Fans

During his account, Boseman tears up as he reveals that the children's families told him they both wanted to "hold on" to life until after Black Panther, inspiring the actor to continue to push himself harder during the making of the film.

Although Boseman himself was also struggling with the disease, he never revealed his personal battle during the interview.

Another clip of Boseman also resurged, featuring the actor on The Tonight Show Starring Jimmy Fallon. In the segment, fans express gratitude for the film and Boseman's strong representation of the Black community.

Life And Career Outside Wakanda

Although Boseman rose to prominence as Wakanda's ruler, the actor was already an established entertainer before entering the kingdom.

After graduating from Howard University with a BFA in directing and attending the British American Drama Academy, Boseman took the acting world by storm, starring in a slew of stage productions, including Romeo and Juliet.

In the mid-2000s, the actor graced the silver screen in series such as All My Children, CSI: NY, and ER.

In 2013, Boseman landed his first starring role in the sports biopic 42, where he portrayed legendary Black baseball player Jackie Robinson.

A year later, Boseman starred in the James Brown musical biopic Get on Up as the late singer.

Boseman's film career would continue to take off with features such as Gods of Egypt, Marshall, the MCU series, and recent action thriller 21 Bridges.

His final film, Ma Rainey's Black Bottom, will be released on Netflix posthumously.

When he wasn't fighting for the throne, cracking down on criminals, and winning Screen Actors Guild awards, Boseman was a vegetarian, a devoted husband, and an advocate for Black Hollywood.

"It's possible for there to be a Chris Pine, or a Chris Evans and Chris O'Donnell and a Chris Hemsworth and all the other Chrises, but it can only be one of us at a time? That is part of the problem."

-Chadwick Boseman in a 2016 interview with The Undefeated

"There's so much material for white actors that [Hollywood] has to manufacture stars, sometimes before they're even ready to be stars," he continued. "And they will put up billboards before people even know who they are...But with us, it's like we have to kill each other before we get there."

Most superheroes have secrets.  Secret identities, secret lives, secret worlds. But it is no secret that Chadwick Boseman was a real-life superhero.